This is an update for how the book "A Scholar's Journey: Divine Tempest" is coming.

Currently, the book is 9000 words or less from complete and I expect it to be fully done by the end of the week.

After, I will begin my edits that will take roughly five days.  Afterward, it will go to editors.

Expect to see more artwork soon for the cover art.
Posted by Grim's Stream Blog at 7:03 AM No comments:

This post is going to be about my thought process and what goes on behind creating one of my stories.

I never want to imply that this is the only right way, there are many.  But, a couple people have been asking about my personal process, so here it goes.


For all examples I will use A Scholars Journey: Book 1 as an example.

Magic?  Yes.
How does magic work?  Through sacrifice of energy.  transfer of energies.  Magic does not appear, it has to come from somewhere.

Gods?  Yes, 16 of them that represent different aspects of life.

Time frame of the book?  one day.

Now, the next question that I wanted to ask myself was about the conflict
What conflict was I going to have? Well, this was a tough one.  Every conflict has been done over and over again and at this point, so the real task I had to come up with was how would I arrange it in such a way that the conflict in and unto itself remained unique.

So, the first thing that I did was think about the bad guy.  The main antagonist of the book is Diametries.

Why is he bad?  That is the thing, he is not.  Well, he is and is not.  To me, the scariest bad guys are the ones that act upon right and wrong, seeking to do the right thing, but in so doing so, they cause damage.

This is what I set out to do with Diametries.  I did not want him to be a sympathetic character.  He had to be remarkably evil, not just sort of evil.  One interesting fact is that you never truly see him fight in the book.  In contrast to Penndarius the main character, he also does not engage in the conflict directly, instead acting through proxies.

So, I finally came up with the name of my book.  It will be called:

The book is coming along great.  I just hit 67,000 words and I am on target to be done with a rough draft by February 1st, then I am giving myself until February 5th to finish out my finishing touches.  Then, I am giving it over to editors.  They will be done by the 20th.

This is some preliminary art sketches that were sent to me by the artist I am working on for the cover. 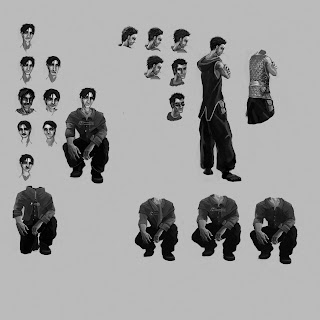 Suspense and informing the reader

Suspense has been used in mystery writings of many genres.  Books, movies, and television have been using it as a motivator to add to their content for a long time.  I believe that it is inherent in human nature to want to “Figure it out.” There is an ache in the back of our minds that urges us to look just a little deeper.  My thoughts on suspense and informing my readers are applied to my own writings, and I wanted to pass them on to you.

First off, I don't write mystery books in the traditional sense.  The surprise twist at the end with no hints does not do the story justice.  I want my readers to have all the tools at their disposal to figure out the answers, but at the same time I want it to be sort of a surprise as well.  Generally I put the answers two chapters before the mysteries are revealed in full.  Also, I like to end my chapters with cliff hangers that just so happen to answer those questions.

Mysteries tend to take a back burner to the action for me, in fact I generally don't make it a priority to throw many mysteries into my books, and however I do generally like to have one mystery that drives the book itself, a main character that tries his best to figure it out.

That does not mean that I believe in being outright blatant about my suspense either.  Just because something is there, does not mean the twist is foreseen easily.  I want the reader to say to others, "I saw it coming." but to be secretly impressed and get that "Awesome!" feeling inside when they read it.

One of the story devices I use quite frequently is the preface at the beginning of the chapter, a bit of information that would come in handy later on, but would not be one hundred percent necessary to read.  This is more of an added bonus and it doesn't feel like blatant exposition, since it is completely optional and separate from the main body of the book.

Let's take my Sci-fi book as an example.  The main character is not the smartest cookie, in fact he is relatively dense and admits to himself that he does not have the brains in the family.  What he does have is the brute power to see it through to the end and to punch his way to the truth (Yup I said punch).  The mystery comes in at the beginning and then takes a back seat to the fight scenes along the way, though it focuses on the now, the mystery pushes the story forward by giving the main character a reason to push forward.

In summation, I want the reader to feel a sense of curiosity.  I want them to ask, “Why is this going on?” and not “What will happen next.” It would be amazing if the reader could figure out what was going to happen, without ruining the twist, so that he/she could pat themselves on the back afterward and get that added sense of, “Good job!” for their insight into the story.  This is my goal.
Posted by Grim's Stream Blog at 11:30 AM No comments:

The role playing games genre (RPG) continues to grow, evolve, and improve with each passing year.  Alpha protocol is an action RPG with its roots in games such as Splinter Cell and Dragon Age.  The story revolves around secret agent Michael Thorton and how he becomes the linchpin for a worldwide conflict.  So, does Obsidian live up to its name as one of the masters of the role playing genre?
Obsidian Entertainment made its reputation by making exceptional sequels to successful franchises, most notably Knights of the Old Republic II and Neverwinter Nights 2.  Alpha Protocol is their first original title.
You play as Micheal Thorton, secret agent who works for Alpha Protocol.  You are betrayed from within and left for dead.  There are two types of game play mixed into a seamless package, role playing and third person action.  You level up your character; spend AP to level up specific skills that directly affect the third person action game play later on.  The story lasts about twenty to thirty hours, gives you multiple story paths, and continues to impress all the way to the end.
Alpha protocol is not without its flaws.  Minor problems hamper the experience, such as frame rate issues in key areas and strange game play decisions, like the camera that is too close to the character.  The game feels like it is one patch away from an amazing experience.
This is a solid action RPG.  The story is fun and the action is well implemented.  Minor issues, such as the frame rate drops and camera issues will detract from your fun; rest assured it is still worth playing.  For the casual gamer this game and its issues could be a turn off, but to the hard core, this is a must have.
Posted by Grim's Stream Blog at 4:11 AM No comments:


My name is Herrick Erickson-Brigl, an aspiring writer in the fiction genres.  I created this blog to promote my writing works and to throw them out to the world, reveal my thoughts on trends, ideas, new inventions, movies, books, and video games.

A little about me:  I am a graduate of the University of Advancing Technology with a bachelors of arts in video game design.  Currently, I am writing two books, a sci-fi action book and a fantasy, mystery, action book.  The fantasy book is coming along quite nicely and I cannot wait to talk about what will be going into the book to you guys.

Today, I will talk about my philosophies for writing fight scenes.  First and foremost, I believe in writing action with a real ooomph to it.  If you punch a person in the face, why stop there?

Example: I smashed him in the face with my fist and slammed his head through a concrete wall, then as his head ricocheted off the hard edge, I palmed his skull into my hand, and pile drove it through the tile floor.

Do you see what I did there? If he was a normal man, do you think he would get up?  (Or want to?)

This is just my style though and I hope that demonstrated my philosophy for fight scenes.  Why should I stop at the norm when I can push it farther, without making it graphic and obscene?


I do make a distinction; writing should be done with a purpose in mind.  If there is to be violence, I want to make it raw, visceral, and violent.  However, I want you to be focused on the archaic beauty of the scene and not the aftermath.
Posted by Grim's Stream Blog at 12:47 AM No comments:

Thank you for stopping by my blog. A little about me:
I am an avid writer and I also work in the game industry.
My first book, A Scholar's Journey: The Divine Tempest generated Rave reviews. It currently holds 4.6 stars on Amazon. My second book A War of Lies is due out at the end of January 2017. Many examples of my writing are posted here, including the first couple chapters. If you like those, feel free to check out the full book on amazon. The link is below:
- Herrick
http://www.amazon.com/Divine-Tempest-Scholars-Journey-Book-ebook/dp/B00513ESTA